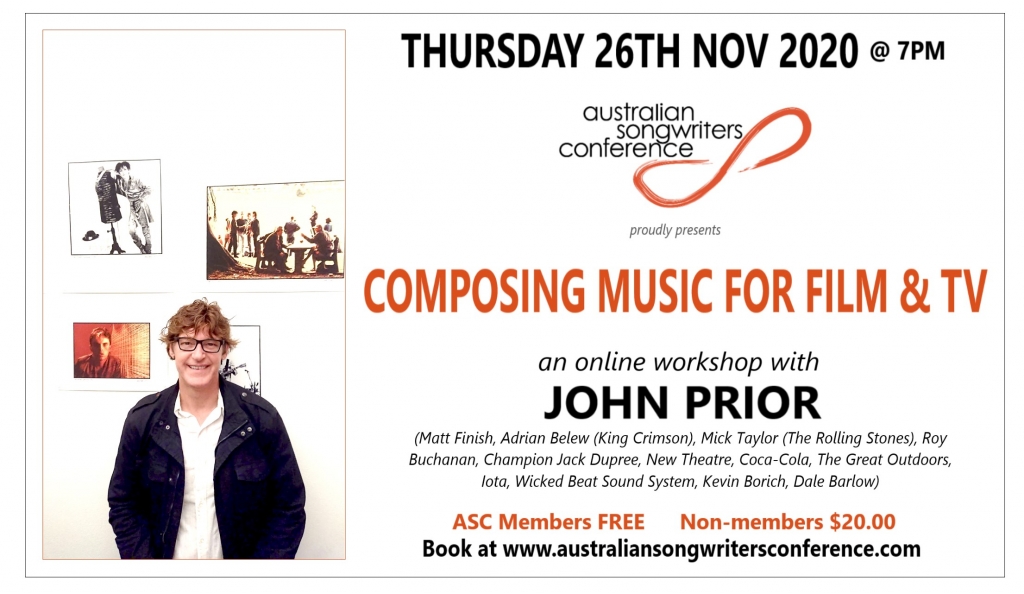 Whether you are new to ‘production music’ or you want to upskill , this session is for you!

Writing songs and music scores for film and television is an art in itself and very different to writing for an artist.  Take advantage of John’s many years of experience successfully writing production music, as he shares his knowledge, wisdom and techniques with participants in this 90 minute session.

Want to know more about John Prior? Listen to this great interview!

Sydney Morning Herald reviewer John Shand wrote: “Prior was a nexus of energy, fun and accuracy” performing with Adrian Belew.

John is the owner and director of Mammal Music Pty Ltd audio/video production company and Unity Gain Studios, where he has composed and produced albums for many independent artists including the ARIA Award winning Tibetan Prayer (Best World/Traditional/Folk Album 1995), ARIA Award nominated The Hipbone Connection (Best Independent Album 2000 and No. 1 on the Australian Independent Record Labels Association (AIR) charts) and ARIA Award nominated The Story of Abbey (Best Show/Cast Album 2002).

He has also produced a number of works for film, television, theatre and advertising, gaining an Australian Guild of Screen Composers Nomination for orchestral composition and production.

In 2013 John formed The Association of Australian Musicians (AM) and AIMA, an online forum for Australian musicians managed by AM, with more than 11,900 members in 2019.

Since 2014, John is also a co-founder and active member of APRA’s Resolution Pathways Dispute Resolution Committee and Peer Review Committee, developing the peer review system for 100,000 APRA members to seek advice and resolve disputes, and winning the Australian Disputes Centre’s ADR Corporate Team of the Year award in 2016 for innovative dispute resolution.

John continues to perform live with Matt Finish, including ‘Classic Hits’ and ‘Pure Gold’ shows for Empire Touring featuring other popular Australian artists such as Dragon, Radiators, Ross Wilson, Mi-Sex, Real Life, Wendy Matthews and GANGgajang, with shows during 2018 at Enmore Theatre with 2,000 people (sold out), WIN Entertainment Centre Woolongong with 2,000, Sandstone Point with 7,000 and Wagga Racecource with 4,000, and Australia Day 2019 at Parramatta Park with 20,000 people.